Want to see if you’re living in a shady town?  Of course!

Check out our list of the safest towns in Virginia and explore the data for OVER 60 towns embedded in the map down below.

As the home of Jamestown and 8 U.S. presidents, Virginia has been central to the establishment and government of a young nation. As such it offers loads of historical sites and buildings.

As a bonus, it’s geography ranges from loads of coastline along the Atlantic and several large tidal rivers to the Blue Ridge Mountains along the western border, offering a variety of views and recreation to residents and visitors.

Those, coupled with a great economy with a lot of stable, government jobs makes Virginia a great place to live and work.  Let’s take a look at the safest cities to establish the cream of the crop.

To come up with the safest cities in Virginia, we:

We were even surprised in a few places. Often, smaller towns are safer, as shown by our burglary risk calculator.  But, several of the towns in the top 10 were in the greater Washington DC metro area, not exactly in the news for great crime rates recently!

That brings up another point, there is a delay in the data for it to get compiled, normalized, and released by the FBI.  So, the 2013 data that we had available does lag reality by a bit.  And unfortunately, not all localities report this data, so some nice places may have been left out. Copy the code to put this badge on your site Population: 8,474
Located in Loudoun County in northern Virginia, Purcellville tops our list due to low property and violent crime rates. Going by the name of Purcellville since 1853, apparently Purcellville has had enough time to work out how to fight crime as well.

The historic little town has a slew of buildings on the National Register of Historic Places and is also home to a private Christian college, Patrick Henry College.  Situated in Virginia wine country, you could visit a winery or brewery every month for a year without repeating.

As far as safety, a violent crime rate in the single digits for every 1,000 residents puts Purcellville at the top of our list this year. Nestled in Rockbridge county, Lexington was first settled in 1777.  Considering its past, it’s no surprise that there’s no shortage of historic sites, including Robert E. Lee and Stonewall Jackson’s grave sites.  Lexington’s also the home of a couple of prestigious Virginia institutions in Virginia Military Institute (VMI) and Washington and Lee University.

The city sits on the Maury River and has an active historic district and still sports an active drive in.  The natural bridge is nearby, a 215′ high natural arch.

Low violent and property crime rates in Lexington earn its spot at #2 in our list of Virginia’s safest cities.

Our third town on the list is just a stone’s throw from Washington D.C., not where you would expect to find one of the safest cities in Virginia.  Set in Prince William County just 21 miles south of DC and a couple of miles from Quantico Marine Corps Base, you may be surprised to see it this high on the list.

The town has plenty to offer potential residents, near the nation’s capitol and home of the Potomac Nationals minor league baseball team.  Nearby Prince William Forest Park offers miles of hiking and biking trails just down the road.

Chartered in 1749, it’s the oldest continuously chartered town in the state.

Be sure to tinker with the map below to see all of the data on property and violent crimes for all 62 cities that we ranked to make our list. 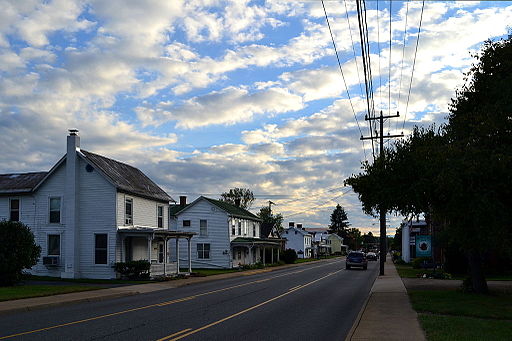 Population: 5,817
Yet another safe Virginia town in the Shenandoah Valley is Bridgewater. Their single digit violent crime rates vault them to #4 on our list.

Outside of the low crime rate, the town is also home to Bridgewater College, a private four-year institution founded in 1880.  It sits almost entirely in a bend of the North River, and the town’s namesake bridge (now gone) was once the world’s longest single-span wooden covered bridge.

For recreation, the town has several parks and trails. Sandy Bottom Park along the North River even features a par three golf course that’s free to play, so you can practice your short game.

Yet another D.C. suburb makes our list as the busy town of Vienna in Fairfax County comes in at #6. I guess all of that government money is good for something!

The town is bordered on all sides by other Washington suburbs, like neighboring Wolf Trap and Tysons Corner.  With the proximity (12 miles) to the nation’s capitol, it has great transportation options for commuting via the Washington Metro Orange Line or I-495 AKA “the Beltway.”

CNN/Money and Money magazine ranked Vienna, VA third on its list of the 100 best places to live in the United States, so it isn’t just known for being safe.  It has highly ranked public schools and beautiful green spaces running right through downtown with part of the Washington and Old Dominion Railroad Regional Park trail coming right through town.

For entertainment, Tyson’s Corner is know for shopping and dining and nearby Wolf Trap amphitheater hosts great acts year-round. These Hokies are excited about their low crime rate!

Located in Montgomery County near the Blue Ridge and Alleghany Mountains, Blacksburg comes in at #7 on our list.  Founded in 1798, it’s the home of Virginia Tech and is understandably known for great outdoor activities nearby.  In 2011, Businessweek named Blacksburg the “Best Place in the U.S. to Raise Kids”.

Blacksburg is also a college town, more recently being known for the Virginia Tech shootings in 2007, the deadliest mass shooting by a lone gunman in U.S. history.  Despite all that, the town still has really low rates of crime.

And, you get a chance to catch some college football on the weekends!

Yet another  town in the DC metro area makes the list at #7.  Manassas Park borders Manassas in Prince William County and shares the same amenities of close proximity to Washington, D.C. and stable, well-paying government jobs.

Although the town itself isn’t huge, the DC metro area had over 6M people in the last census.  So, there are plenty of amenities within a short drive.  The DC metro is the most educated and wealthy in the nation, which is reflected in the crime rates of many of the surrounding localities.

Near Lexington, Beuna Vista is yet another town in the Blue Ridge Mountains that makes the cut this year.  The town sits on the east side of the Maury River and has an assortment of biking, hiking, and scenic drives available nearby.

Buena Vista is also home to Southern Virginia University, home to about 1,000 students.

Population: 22,565
Coming in at #9 is Fairfax, the county seat of Fairfax County in northern Virginia (NOVA).  It sits just 16 miles  southwest of Washington, D.C. and has a dedicated station on the Washington Metro Orange line to get commuters in and out of the city for business.

Fairfax is also home to George Mason University (GMU), which is home to 34,000 students during the school year as Virginia’s largest public institution.  The town is also home to Virginia International University.

The town is known for quality public schools and high median income, keeping the crime rates low and earning its spot on our list. Just made the cut!

Population: 12,150
Essentially a suburb to the Hampton Roads area, Poquoson just sneaks into the bottom of the list to be one of Virginia’s safest cities.  The town’s proximity to Norfolk, Newport News, and Virginia Beach make it a great place to live and work.  There are abundant Navy jobs, keeping the unemployment rates low.  And despite having all of the young sailors around, they still manage to keep the crime low.

It’s a good thing public intoxication doesn’t show up as a violent crime!